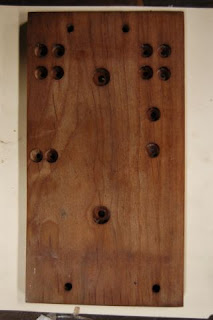 Apologies for the long gap. We are back!
Here's a challenge. Making a good custom-built insulating panel in 1910, without use of asbestos, custom ceramics, or plastics.

The great minds of the age started with wood. Tests were done and it was found that maple, a hardwood, was the best combination of strength, workability and a natural insulator. Except, of course, when it was wet. And wood is always somewhat wet. If you dry it out entirely, it cracks, and in any case, reabsorbs moisture from the air over time.

The idea was struck to use paraffin wax to offset the water. But how? Even if you melt it on, there's still water within the wood.

Experiments were tried with VPI (vacuum pressure impregnation). In this, the unit is dipped in resin, set in a pressure vessel, and a vacuum is drawn. Water boils at about 75 degrees F in a vacuum, so it boils off, the vapor taken in by the vacuum pump. There is literally nothing in the voids, so when vacuum is released (and shop air pressure applied), the resin is sucked into the voids. It's a great theory, it works on metal machines like traction motors. But alas - not wood!

As it happens, liquid wax is happily above the boiling temperature of water. So of course, they had tried simply immersing the wood in hot wax. Above 212 degrees, the water boils off nicely, replaced not with a void, but water vapor. When it cools, this vapor condenses to a tiny amount of water, creating a vacuum that should draw in the wax. Assuming the wax had not turned solid!

In the early days of electric equipment, a great deal of testing had been done on this. They examined wax saturation and insulation quality. With help from the railway preservation community at large, BAERA volunteers had done some research on this. 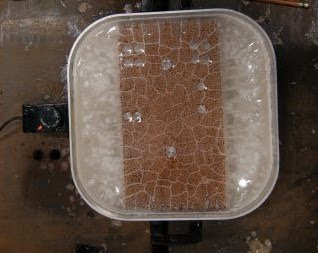 It turns out there was a very particular pattern of temperature control that was required - heating to high temperature to drive off water, then a lower temperature to allow wax to absorb. The sequence took several hours.
It was within the range of a common (nowadays) electric skillet. The board barely fit! Here we see it at the end of the cycle, the wax re-frozen.
One might look at the picture and think: "OK! Turn it back on, come back in 20 minutes, and fish the board out of the wax!" No. After it was out, the wax would flow out of the wood. In fact, the board must be removed with the greatest care - the wax can be barely softened, and heated with spot heat from a "hair dryer" just enough to wipe the excess away.
The wood has already been machined (drilled). This was a product of careful and repeated fitting to the car. Even with the refinement of these techniques, wax impregnation is far from complete. Machining afterward would have exposed areas of poor penetration.
Posted by Robert MacDowell at 12:01 AM 7 comments: 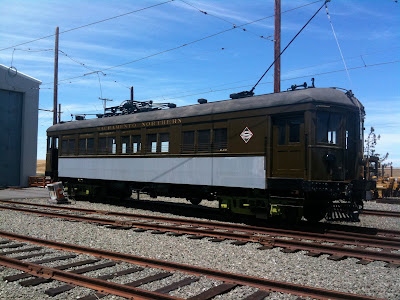 Here is SN 1005 parked outside Carbarn 3 for Member's Day. The lower panels are being prepped for paint. The other side is already painted. The car looks good!

What's going on with 1005? First, a complex repair on the brackets which hold up the radial coupler - a lot more on that job is coming. Second, the seats are being sent out for re-upholstery.

Why does it look so good while being parked in the dusty shop? It's kept under plastic. Here you see ropes set up to lift the plastic off the car. 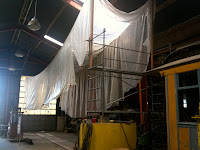 Posted by Robert MacDowell at 7:38 PM No comments:

Last month the car was operated on its own, for the purpose of turning the car around and doing testing of the propulsion system and brakes.

A video of excellent quality was captured, and is located here.

Posted by Robert MacDowell at 9:43 PM No comments: 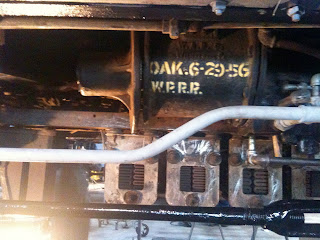 Let's review some earlier work. Many of the components of 1005's brake system have enjoyed an overhaul. Now we get a glimpse of the teardown of the brake cylinder. No, it hasn't been since 1956. You can see in the picture below, the innards of the cylinder.
Center is the piston itself, which moves inside the housing. The plate above it clamps a large rubber gasket. You can see the gasket on the edge of the picture being held by a volunteer.
Upper left is the non-pressure head of the cylinder, also viewable on the left side of the piston in the picture above. As you can see, it guides the piston and gives the spring a place to nest. The spring is a return spring, which assures the piston returns to its seat when pressure is released. Among other benefits, this also protects the piston shaft from the weather.
A hand powered forklift was used to lower the relevant sections from the car - as they are heavy. Parts were cleaned and painted, gasket renewed, and reassembled and returned to service. 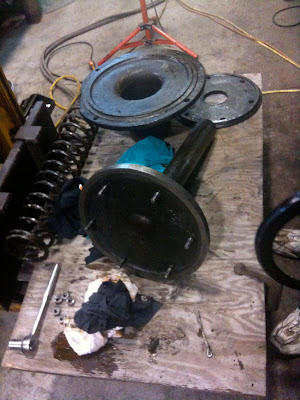 Posted by Robert MacDowell at 1:32 PM No comments: 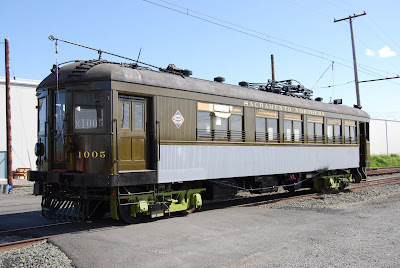 Dave Johnston reports: Yesterday afternoon SN 1005 was switched out of the shop in order to turn it around so the coupler can be installed at the rear of the car. The car was moved off shop track 2 and placed under trolley wire by diesel locomotive VE 502. Then the pole on 1005 was placed on the wire and the dynamotor compressors pumped the car up. With a small group of shop staff on board, the 1005 made two trips down the tail track and around the loop under its own power. With the exception of a sticky whistle valve, the car operated flawlessly. This is the first operation of the 1005 in over ten years.

The brake system has been converted back to the M 24 A and M2 B brake valves, which operated much better that the system it had since its Key System days. Work still needing to be done includes seat upholstery, upper sash, final paint, rear coupler, and lots of details.
Posted by Robert MacDowell at 2:23 PM No comments:

Sacramento Northern 1005 has moved under its own power! For the first time in a decade.
The reverser is complete and tested, and the wiring is intact.
If you were at Members Day, you know the PCC and caboose switched places in the shop. At that time, the truck was moved under the car, and work was completed on wiring the reverser.
The motors were jacked up, and one at a time, energized to confirm that they turn in the correct direction.
The car was lowered off its jacks. The four jacks, including the damaged jack, are now out from under the car.
Tuesday, insulating the traction motor wiring was completed.
Today, power was applied and the car moved. Only 8 feet, but one giant leap for the project.
Posted by Robert MacDowell at 1:06 AM 3 comments:

Spaghetti at the Western

The reverser side rails are back and it's time to reassemble the reverser. Excuse this somewhat boring blog posting, it will simply contain the pictures the shop crew needs to rewire the unit correctly. Click on the picture to zoom in a lot. 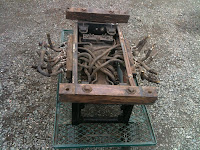 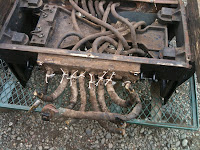 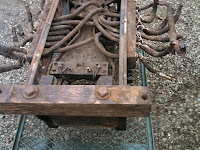 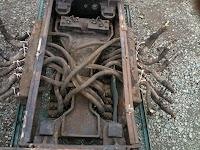 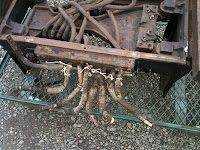 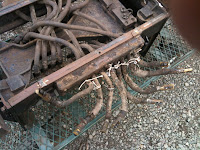 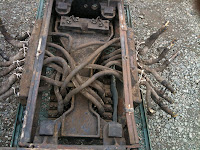 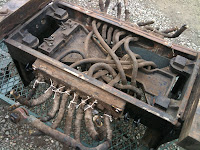 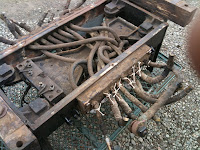 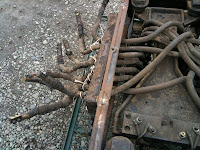 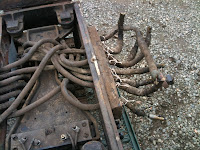 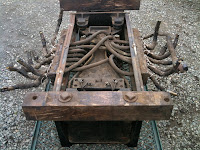 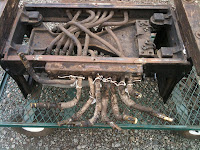 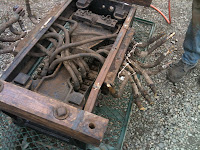 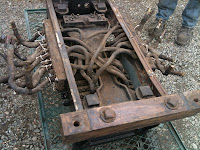 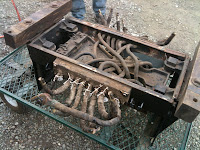 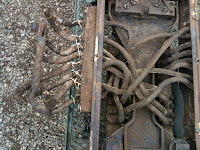 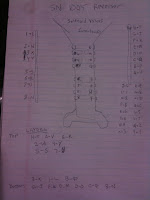